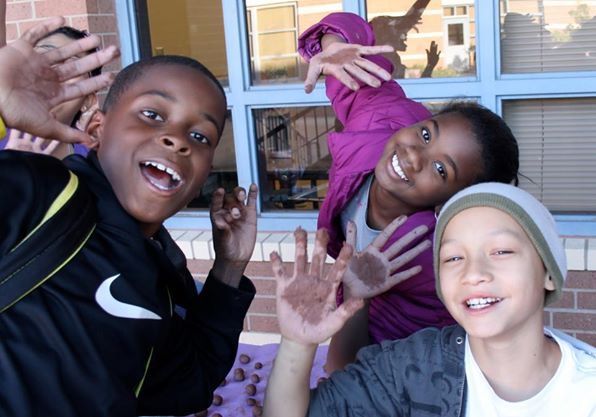 Are More Cooperative with Others

Time spent outdoors supports many aspects of children’s health, including their ability to connect and cooperate with others.

This study investigated associations between preschool children’s socio-emotional and behavioral (SEB) development and natural features near the schools they attended. A primary goal of the study was to understand how “school nature” might contribute to children’s SEB development, beyond what the children gained from “home nature” (natural elements in the home environment).

Researchers obtained Fall (November) and Spring (May) assessment results of preschoolers participating in a publicly funded preschool program in Charlotte, North Carolina for the academic year 2013-2014. Teachers from 50 different schools administered the Devereux Early Childhood Assessment Preschool Program, Second Edition (DECAP2) to the preschoolers in their class. The DECAP2 is a nationally standardized tool designed to assess socio-emotional resources and protective factors in preschool-age children. Areas assessed include initiative, self-regulation, attachment, and behavioral concerns. Aerial photography and Geographic Information Systems provided measures of naturalness or greenness near the children’s homes and schools.

Findings indicated that preschoolers with more exposure to trees either at home or at school showed greater improvement in socio-emotional competencies than preschoolers with less exposure to trees. Findings also showed children having greater independence and social skills when their schools were in neighborhoods with limited impervious surface, such as concrete. This was especially true for children living in neighborhoods low in impervious surface. There was some evidence that the benefits associated with tree canopy may ﬂuctuate according to seasons and that the potential impact of “school nature” may depend on levels of “home nature”.

Observations were conducted in six preschool classrooms: two classrooms from kindergartens run by the government; two classrooms from not-for-proﬁt kindergartens; and two classrooms from commercial childcare centers. Two research assistants conducted the observations and made video recordings. The recordings focused on a variety of indoor and outdoor activities reﬂecting a typical day in the kindergarten classrooms. Two questions framed the study: (1) How do situational factors (group size, activity, and type of teaching opportunity) inﬂuence the frequency of SEL support? (2) What types of strategies do teachers use to support SEL in areas identified in the national curriculum (self-awareness and positive self-concept, self-management, social awareness, relationship management, and responsible decision-making)?

The Role of Public and Private Natural Space in Children's Social, Emotional, and Behavioral Development in Scotland Over Time

Data on nearly 3000 children living in urban Scotland were accessed from the Growing Up in Scotland survey. The data included responses to the Strengths and Difficulties Questionnaire (SDQ) completed by the parents when their children were 4 years of age and again at age 6. The SDQ addresses five domains of child development: Hyperactivity Problems, Emotional Problems, Peer Problems, Conduct Problems, and Prosocial Behavior. Parents also provided information about their children’s access to a private garden or yard. Additional data about children’s access to natural space (including public parks) was based on information gathered from Scotland’s Greenspace Map.

This study examined the effects of a nature kindergarten (NK) on different aspects of children’s functioning. This nature kindergarten, located in British Columbia, Canada, is a part of the public school system; and in addition to meeting the requirements of the British Columbia curriculum, is based on the following pedagogical principles: connecting deeply with nature through play; emphasizing local ways of knowing and understanding; promoting physical and mental health; learning collaboratively as part of an empathetic community; and looking to the environment as a co-teacher.

Two groups of children participated in this study: 41 children attending the NK and 45 children attending a regular kindergarten (control group). Both groups participated in the same battery of assessments at the beginning and end of the school year. This battery of tests included assessments of working memory, directed attention, inhibition, physical competence beliefs, motor coordination, nature relatedness and environmentally responsible behavior. Parents and teachers completed the Social Skills Rating Scale at the fall and spring of the academic year. For assessments of physical activity levels, children wore motion sensors at three different time periods during the year (October, January, and May). The data analysis focused on changes in and a comparison of functioning in the assessment areas of the two groups of children.

There were differences in children’s motor skills, with children in the NK group performing better than children in the control group. Results also indicated that attending the NK had beneficial effects on children’s social skills and well-being. However, results showed no significant differences in the changes in activity level, attention, working memory, nature relatedness or environmentally responsible behavior between the two groups of children. These findings appear inconsistent with existing research. The location of the control school, however, may explain – at least in part – this inconsistency. The school district in which this study was conducted is in a rural setting, giving both groups of children access to a comparable amount of green space, making it possible that there is already sufficient exposure to green space, thus spending extra time in a forest does not provide additional benefits for cognitive functioning.

There are numerous studies that document the benefits to students from school grounds that are ecologically diverse and include free-play areas, habitat for wildlife, walking trails, and gardens. One major study is "Grounds for Action: Promoting Physical Activity through School Ground Greening in Canada" by Anne C. Bell and Janet E. Dyment. While this study has roots in concern about obesity in children, it documents results and benefits beyond weight loss. Children who experience school grounds with diverse natural settings are more physically active, more aware of nutrition, more civil to one another, and more creative. One of the major benefits of green school grounds is increased involvement by adults and members of the nearby community, from helping with gardens to enriching the lifescape of the school grounds. Concerned about policy implications, this report offers specific recommendations for actions communities can take, from local neighborhoods to cities, states, and provinces. (Original Research)