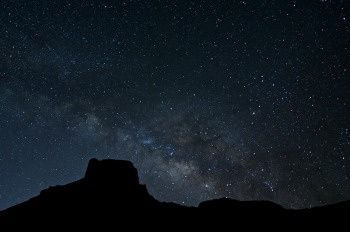 Exploring the Skies at Night- October

As day dwellers, the nighttime is something that we rarely get to fully appreciate. It surrounds us with a whole new array of wildlife and the cape of darkness that covers everything is an unreal feeling. The night sky in particular is a magical wonder that can make us realize a number of things. Looking out into the sea of endless stars, you may realize how small we are in comparison with the rest of the universe.

The stars seem to speak to us and invite us to a higher level of understanding. Dark skies serve to illuminate the reality that civilization does so well to cover up. For those of you that are longing for that reality and to escape the city lights, here is a list of some of the best places to go in Texas to appreciate the night:

Big Bend National Park- This park is one of the largest, most remote, and least-visited national parks in the lower 48 United States. Its great distance from major urban centers renders the skies over Big Bend among the darkest in North America.

Copper Breaks State Park- For 19 years this park has capitalized on its superb celestial assets by hosting Star Walks and other astronomy programs.

Enchanted Rock State Park- This park is a gold-tier member in the International Dark Sky Places Program. Try planning a visit during one of their star parties and observe the sky through a telescope.

Davis Mountains State Park- This mountainous region in West Texas is known for its isolation and superb viewing of the night sky.

McDonald Observatory- Located just down the road from Davis Mountains State Park, this viewing area attracts researchers and stargazers alike from near and far. Star parties are a very common occurrence here and you can broaden your knowledge on astronomy, as well as view constellations and planets through some of the most high powered telescopes in the country.

Kickapoo Cavern State Park- This diverse park in Brackettville, Texas features 20 known caves and some impressive formations. Come on a clear night and you can marvel at the night sky far away from the pollution of city lights.

Big Thicket National Preserve- People have called the Big Thicket an "American ark" and "the biological crossroads of North America", as it has one of the most biologically diverse assemblages of species in the world. Its area of 112,000 acres of land means that you will be thick in the middle of nature and away from city lights. So relax for the evening and look up to enjoy the stars!

Goliad State Park and Historic Site- Located in Goliad, Texas, this area hosts star gazing events where you can learn about the phases of the moon, hear stories about constellations, and enjoy s’mores by a campfire!

It is difficult sometimes to see the stars in urban areas because of light pollution. However you can help reduce light pollution by installing "Dark Skies" lighting fixtures outdoors, or turning off outdoor lights. Light pollution has been shown to negatively impact sleep patterns in children, adults and wildlife.

You can use the Sky Guide app to learn about the stars and constellations above and below you. Find more parks and nature centers near you at NatureRocksTexas.org